The clinics listed below are those that have been brought to our attention, the information will be updated as it is provided to us. Please again realize that this list by no means includes everything that is available, it is just all that we have found so far to be reliable. All of the clinics listed are treating Fourth stage cancer patients. We are always investigating information as it is presented to us.

This addiction treatment center includes detox, residential as well as outpatient treatment.  They also include their own unique Neuro Rehabilitative Therapy which uses an exemplary brain retraining process that helps to reestablish a more normal  brain function post addiction.  The facility is located in south Florida. website: https://fherehab.com/   and phone: (844) 619-4709

Located one block south of the U.S.- Mexico border, just outside San Diego. They can be reached on a U.S. toll free Telephone: 888-671-9849. (to reach a nurse for information call: 619-303-6291) Dr. William Hitt has devised a novel treatment for addiction that restores the brains amino acid balance using an “intravenous solution of amino acids (the building blocks that make up all the proteins in our bodies) which actually rebuild the damaged areas of the brain. These basic amino acids are specially formulated to be able to penetrate and positively influence the brain. The brain can then function again much more normally, cravings disappear, stress levels become much more normal, and clarity of mind is restored. They can also be found on the internet at: www.WilliamHittCenter.com.

New Clinics in in Verona, Italy and in Sint Maarten

In 1978, in Chicago, a Doctor invented a device to treat cancer. The trial showed 86% remission in the subjects.

In 2017 at the University of Tokyo a trial of a similar device showed remission in 96% of the subjects.

Both devices used magnetic fields. Both devices suffered from lack of focal distance. The Chicago machine was essentially a solenoid coil with the test subject being placed inside the solenoid having  a diameter of about 6 inches. This limited the device to small animals. In spite of efforts in America and in France (the government supported Bordeaux Project) the device could not be scaled up to accommodate a human patient.

In Tokyo a different approach meant that the device had to be within 15 millimeters (0.04 inches) of the cancerous tumour. This limits the device to treating surface lesions. It is now being used to treat skin cancers and some melanomas.

The Vidamas 400 also depends on magnetic fields but is considered a breakthrough because it has a focal length from source to object of 15 centimeters (6 inches) such that it can focus on almost any tumour anywhere in the average human patient.

The Vidamas 400 has obtained a CE mark and is registered with the Ministry of Health in Italy as a medical device for treatment of patients with cancer. It will subsequently be registered in all 27 countries of the EU.

The treatment is outpatient and involves up to 15 hours spread over 5 days. There are no side effects, no after-effects, no pain.

The Vidamas 400 is already in use in clinics in Verona, Italy and in Sint Maarten, which are accepting patients worldwide. Units are now available for rent to qualified clinics. More information is available at www.vidamasclinics.org 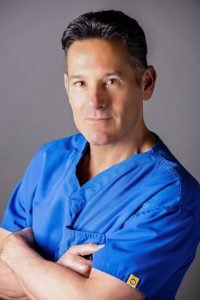 Dr. Mark Rosenberg received his undergraduate degree from the University of Pennsylvania and his medical degree from Georgetown University School of Medicine in 1988. Dr. Rosenberg completed his residency in emergency medicine where he was awarded “Resident and Teacher of the Year.” Dr. Rosenberg has been director/assistant director of several emergency departments, including Walter Reed Army Medical Center.

While staying active in academic emergency medicine, Dr. Rosenberg began contemplating methods to improve healthcare, such as how to improve treatment of the cause of medical disorders, rather than just treating the symptoms. In the late 1990s, Dr. Rosenberg reviewed the literature regarding obesity drugs and subsequently developed a novel drug for the treatment of obesity, for which he filed a patent.

Dr. Rosenberg’s drug development for obesity was sidetracked, when his mother presented to his emergency department with chest pain. Dr. Rosenberg diagnosed his mother with non-small cell lung cancer, that had metastasized to the liver, spleen, and bilateral adrenal glands. Dr. Rosenberg consulted with oncologists at preeminent cancer centers, where he learned the following: for most solid cancers (as opposed to leukemias and lymphomas), we have extended survival by approximately 2 months over the past 20 years.

Dr. Rosenberg’s career path swiftly and abruptly changed course, toward the study of cancer. He began studying tumor metabolism and then became the program director for the first Integrative Cancer Fellowship in the U.S.

Dr. Rosenberg and his team began working with Univ. of Minnesota, and eventually filed patents, on novel monocarboxylate transport inhibitors (MCT). MCTs are responsible for transporting lactic acid outside and inside the cancer cell, which are transporters that are vital for progression of many cancers.

Simultaneous with the work on MCTs, Dr. Rosenberg began looking at the literature regarding drugs that target cancer stem cells (CSC). CSCs, which are resistant to most cancer treatments (including chemotherapy), are the primary reason for cancer treatment failure. The literature revealed that salinomycin, an antibiotic that has been used in chicken and pig feed for over 30 years, exquisitely targets and kills CSC. Although exciting, there are two problems with this drug:

Patent expired long ago, so there is no financial incentive to sponsor a clinical trial.

Dr. Rosenberg took 2 patients with end-stage small cell lung cancer and treated them outside of the U.S. with salinomycin, achieving complete remission in both cases. As of the time this article was written, the first patient has been in remission for 4.5 years and the second for 3.5 years.

Dr. Rosenberg and his team started a pharmaceutical company and partnered with a few individuals from Harvard, with the goal being to reduce toxicity of salinomycin, while improving its selectivity for cancer cells, thereby sparing normal cells. The animal studies look extremely promising, so Dr. Rosenberg merged his company with another pharmaceutical company, which will likely improve his ability to raise funds for the first human trial.

Dr. Rosenberg’s career path has clearly taken an unusual turn, but he has dedicated his life to making a difference in the lives of those effected by cancer.

He can be reached in Boca Raton at: https://www.amtcare.com/

Located in Tijuana, Mexico. Telephone: (011 5266)84-90-11. They use Hoxsey Therapy at this center. Hoxsey Therapy was in use in the United States for many years and had proven itself very successful. The treatment was forced out of the U.S. in 1963, when they relocated to Mexico. The treatment is very affordable. There is extensive information on this therapy available on the web. Just type in Hoxsey. (Patricia Ward Spain’s article is quite good)

Run by Dr. Jeffrey Freeman is in Tijuana, Mexico. You can reach them at: 011-52-66-824-902. The therapy used here is called “High PH”, the original research and successful results of this type of treatment began as early as 1925. Their treatment presently consists of a cesium drip along with aloe and other augmenting nutrients.

Gerson Therapy was developed by Max Gerson, MD over 60 years ago. (He was the celebrated physician to Dr. Albert Schweitzer) With it’s whole-body approach to healing, the Gerson Therapy naturally reactivates your body’s magnificent ability to heal itself; with no damaging side-effects. An abundance of nutrients from 13 fresh, organic juices are consumed every day, providing your body with a super dose of enzymes, minerals and nutrients. These substances then break down diseased tissue in the body, while enemas aid in eliminating the lifelong buildup of toxins from the liver. Over 200 articles in respected medical literature and thousands of people cured of their “incurable” diseases document the Gerson Therapy’s effectiveness. The Gerson Therapy is one of the few treatments to have a 60 year history of success. There are currently three licensed Gerson clinics – in Mexico, southern California and Hawaii. To find out about how to be admitted to a Gerson clinic, or for a list of Gerson licensed practitioners, contact the Gerson Institute: 888-4-GERSON or (619)685-5353 or info@gerson.org. For more information visit: www.gerson.org. View their free award-winning documentary, The Gerson Miracle, at www.thegersonmiracle.org.

The Hale Clinic was established in 1987 and was officially opened by HRH the Prince of Wales in 1988. The Clinic was founded by Teresa Hale whose aim is to combine and integrate the principles of conventional and complementary medicine. Great emphasis is placed on preventative medicine as a way of maintaining good health following treatment. The Hale Clinic has pioneered research into chronic fatigue syndrome, multiple sclerosis, autism, cerebral palsy and repetitive strain injury.

Teresa Hale Has published 2 books The Hale Guide to Complementary Medicine and Breathing Free. She has lectured in UK, Italy, US and Dubai and appeared on UK, US and Emirates Television and the Hale Clinic Has been covered extensively in UK And international press. The clinic has attracted many celebrities and royalty over the years who like many of our patients see complementary medicine playing a vital role in the future of their health. They can be reached at: 7 Park Crescent, London; W1B 1PF Tel: 0870 167 6667 Fax: 0870 169 0777 and at www.HaleClinic.com.

This clinic is located in West Palm Beach, directed by Brian Clement. They use a variety of new technologies for the critically ill as well as providing a live in program that focuses on diet, attitude and cleansing. They can be reached at: 561-471-8876, fax: 561-471-9464; the address is: 1443 Palmdale Court, West Palm Beach, FL 33411

These clinics are located in Haverhill, Boston & Quincy, Massachusetts. Dr. Tom Tam is the Director of the clinic. He administers a variety of treatments in true Oriental traditions. He can be found on the web at: www.TomTam.com. One of the numbers where he can be reached is: 978-374-2231.

In Tijuana, Mexico can be reached by phone at 011-52-66-831-398. Someone is always available at the phone who is able to speak English for information and registration This clinic has many different treatments available, they use their knowledge to match the best treatment for the type of cancer being treated.

Dr. Laszlo K. Csatary and Eva Csatary; they can be reached via a Fort Lauderdale phone/fax number: 954-525-3120. Their clinic is in Budapest, Hungary and uses a not-so-new Virus Therapy that they have been researching and developing for over 30 years. They have patients that are in remission since their inception.

The decision for treatment is always between the patient and the professional. We provide information but we make no suggestions.

No person or organization has paid to have this information printed.